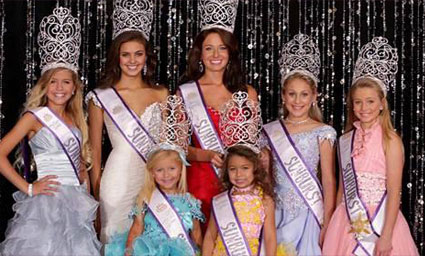 Theresa Spooner, founder and Executive Director of Sunburst USA, Inc. had competed in beauty pageants as a teen and had also coached and entered her two daughters in various competitions in Florida. Both had won many local, state and National competitions so Theresa had a complete understanding of the many benefits derived from the interaction with others, the poise, confidence, and self-esteem one gains from appearances in front of a crowd. While she recognized the many benefits, she also was aware of things she found undesirable in most of these events; unorganized, not on schedule, not delivering prizes, lack of opportunity, and chaos.

It was with the benefits she recognized along with the short comings she experienced that Theresa founded Sunburst Beauty. She was determined to accent the positives and eliminate the negatives and vowed that the only complaint one could have after competing at Sunburst would be, “I did not win.” She felt that if this was the only complaint one had after a Sunburst event, then she had conducted a great event; as she had no control nor input into who won. That decision rested in the judges alone.

Sunburst began as a Florida only event and prelims were conducted all around the state of Florida and the first state final was held in Ocala, Florida. Word spread rapidly, and within a year word of Sunburst had reached several bordering states and even into the Northeast. Folks were telephoning and writing; asking that Sunburst come to their states. Sunburst rapidly responded to these requests and soon events were being held in Georgia, North and South Carolina, New York, Ohio, Missouri, Kansas, and eventually nationwide.

The Sunburst mission was and still is: Provide wholesome competition that not only contestants but their entire family can enjoy. Create an environment where our contestants can grow, mature, develop, and exhibit their talents, personalities, interpersonal skills, and sportsmanship, providing opportunity and rewards, that will further enhance their lives and provide direction as they pursue their ambitions. Sunburst has had Miss America winners, Miss USA, Miss Universe, doctors, lawyers, CPA’s, business entrepreneurs, engineers, actors, singers, dancers, musicians, and many other success stories over the years. We are extremely proud of not only who our contestants are but the outstanding folks they have become.